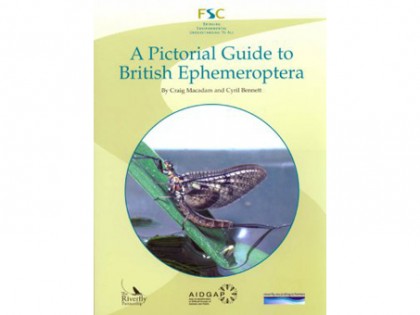 A Pictorial Guide to Ephemeroptera (Mayflies) 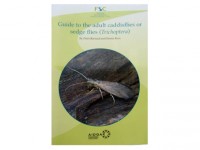 Mayflies  is a pictorial guide to British Ephemeroptera.

This is an identification guide to both the adults and nymphs (larvae) of the 51 species of mayflies of Britain and Ireland. Two photographic keys (one to adults and one to nymphs) take identification to family level, leading to further illustrated keys to individual species. Detailed individual species accounts follow. These include distribution maps, habitat requirements, conservation status and distinguishing characters. For many species, the guide can be used to identify live specimens in the field.

Mayflies can be seen emerging from the water, resting on nearby vegetation and most commonly ‘dancing’ above head height, along the shores of many still waters and rivers. The word mayfly is misleading as this group of flies can appear throughout the year. However one common species, Ephemera danica, emerges as adults when the mayflower or hawthorn is in bloom. There are around 3000 species around the world, with 51 in the British Isles.

The mayfly has a fascinating life cycle. It is the only insect that has two adult stages: the sub-imago (or dun) and imago (or spinner). Males form a swarm, which females fly into to mate. After mating the female descends to the water surface to lay her eggs. Spent and motionless, the female lies with wings flat on the surface, often becoming prey to fish. The females of some species of Baetidae crawl under the water to lay their eggs directly on submerged stones. The male either rejoins the swarm or flies to nearby vegetation and dies. The eggs fall to the bottom of the water where they stick to plants and stones.